I didn’t mean to fall in … like with Fukuoka. After all, it wasn’t meant to be anything except a gateway to our more important destinations.

So I wasn’t expecting much. In fact, I expected nothing.

The first impression when we stepped out from the hotel was – how quiet. For a compact city, Fukuoka seemed unexpectedly serene. There weren’t many people on the roads.

We did temple-hopping first since there were many temples nearby. Really very zen because we didn’t meet many people along the way.  I remember a very nice walk under a light drizzle and admiring the quaint houses along the street. Like this one.

Then we hit the malls. We went to Canal City first. OMG. All hell broke loose once the shopping fiends were unleashed. All the shoppa-maniacs started to unveil their claws, colours and …. wallets … 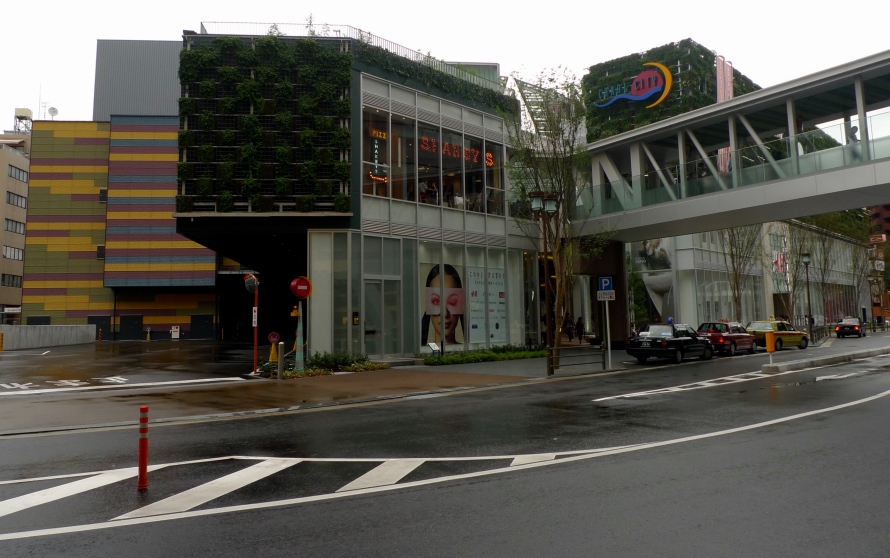 Canal city from outside 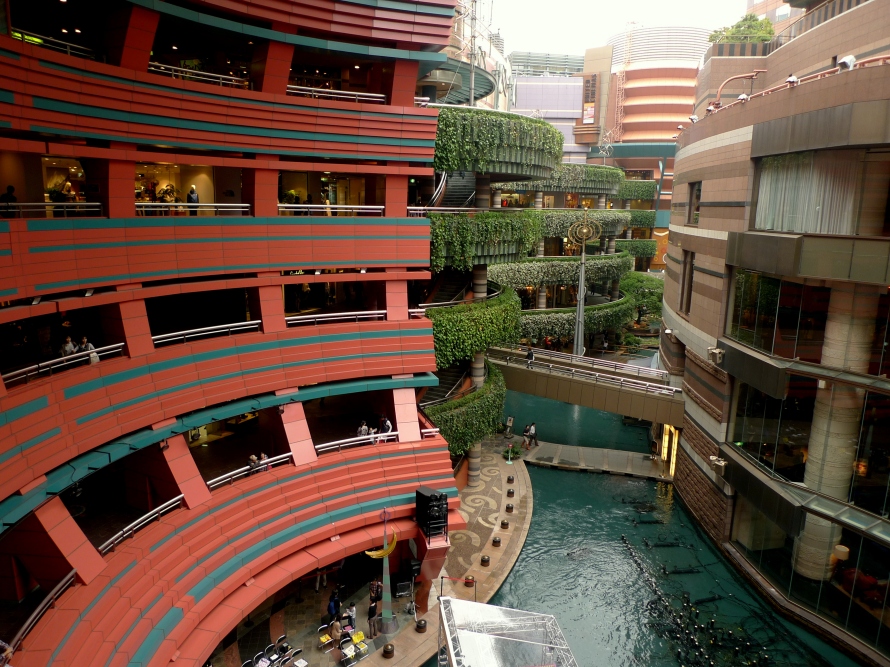 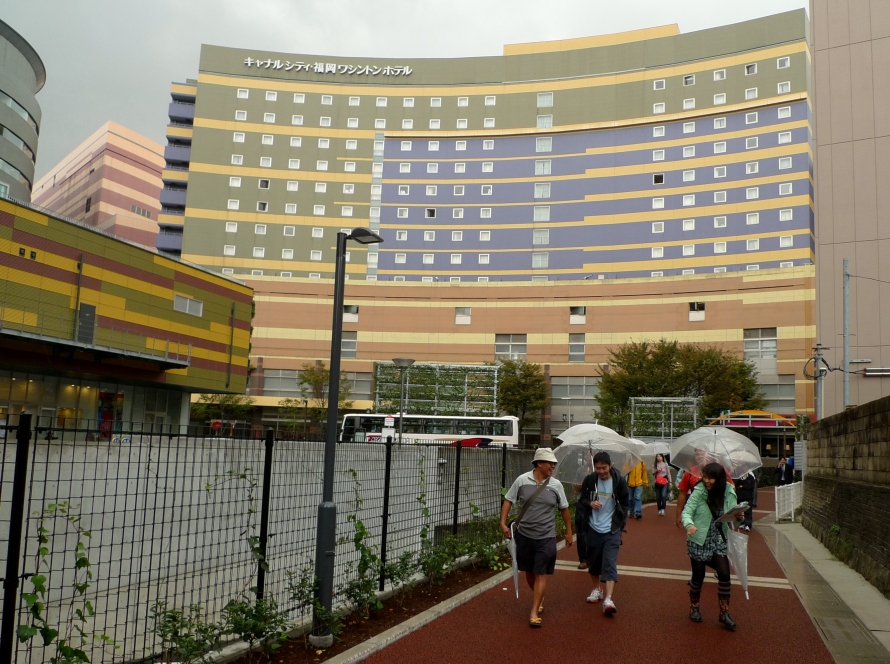 Walking away from canal city

Canal city blew me away on a few counts:

I only had time to walk up and down and ooh and ahh and take pictures (we were only allotted 1 hour). Lunch was meant to be at the Ramen Stadium but the queues were sooooo long, we backed off and went for something less spectacular.

In the evening we went to Hakata JR station for dinner. There, another shopping universe awaited us. 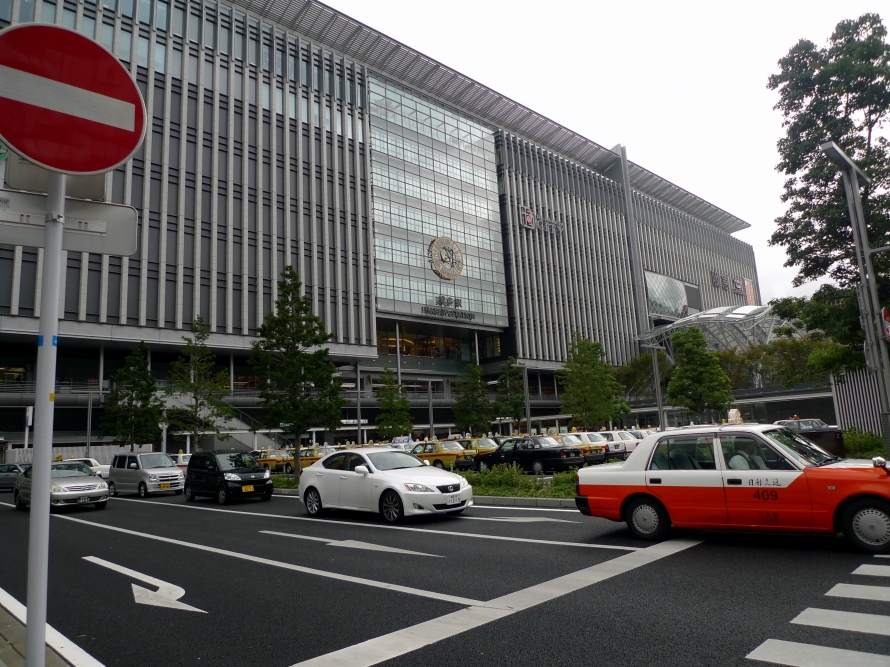 There’s the Tokyu Hands department store that sells almost everything, rows and rows of patisseries selling delicious cakes and Japanese-styled desserts – convenient for travelers needing to buy souvenirs for loved ones home or to give to business partners. There’s a huge supermarket that stocked fresh produce, Mentaiko (most famous in Fukuoka), bentos, and local fruits. 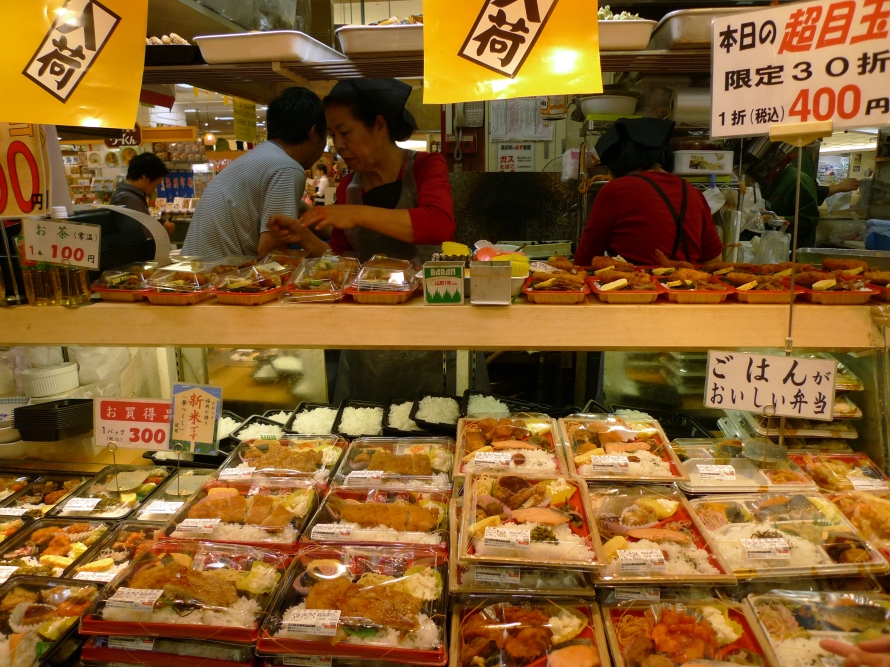 By chance, we discovered the most delicious kiwi fruit we’ve ever eaten, thanks to Junie’s papa (because Junie thought of papa’s love for kiwi so she noticed the kiwis and decided to get some). The Fukuoka kiwi has a reddish core and yielded a light honey sweetness when you bit into its flesh. I’d not eaten anything like it before. Simply heaven! 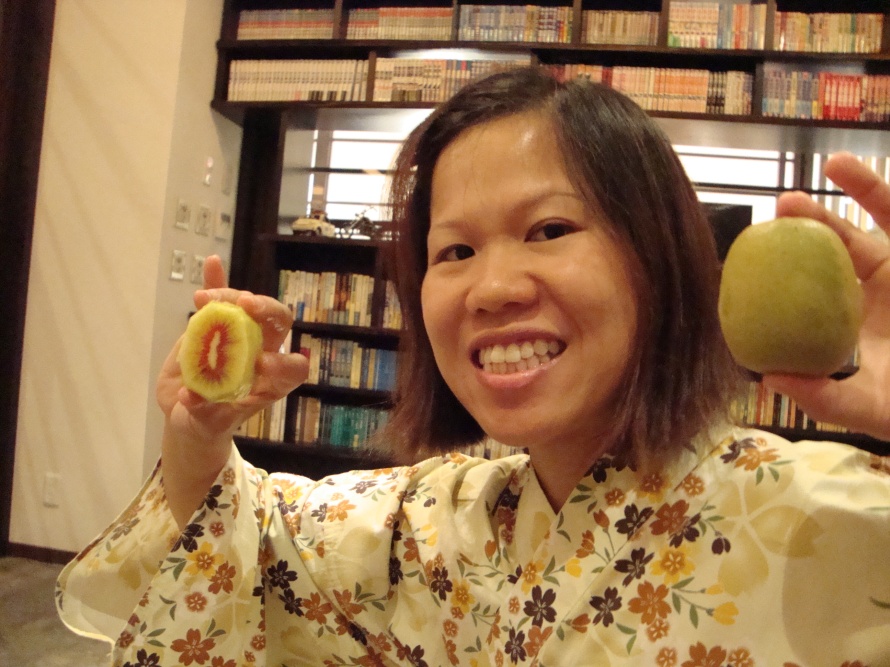 I bought a dozen back to Singapore which were  devoured up in no time. 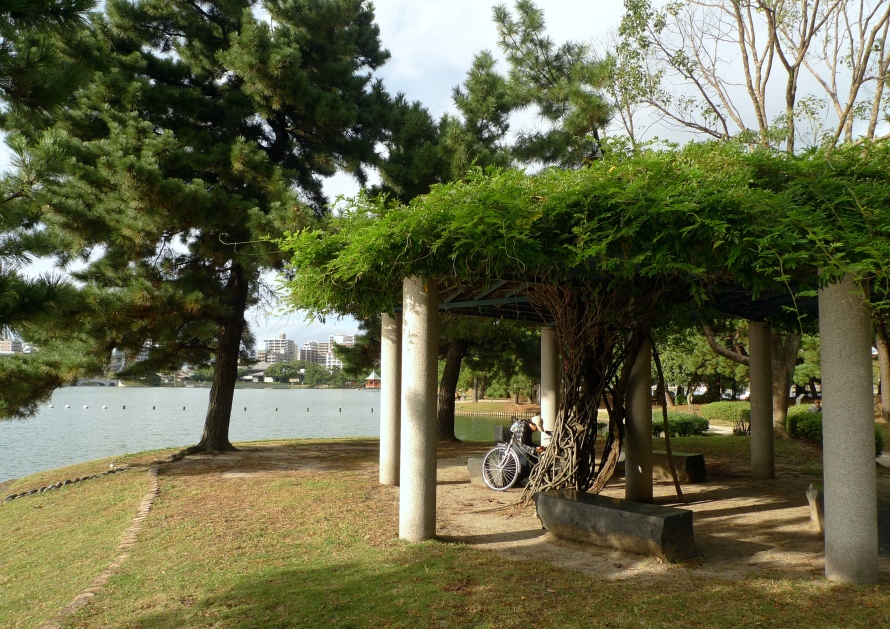 Beautiful folly in the park

My favourite place had to be the Ōhori-kōen 大濠公園 . The park was huge and beautifully landscaped.

There’s a big lake in the middle where fathers tried to bond with their kids doing water activities. Again, there was no trouble finding ourselves surrounded by beautiful and fit people. The weather was lovely and the wooded paths made for very nice walks. Occasionally we’d hear a trombone blaring away patiently and discovered a student making her practice there. The castle ruins was also nearby. 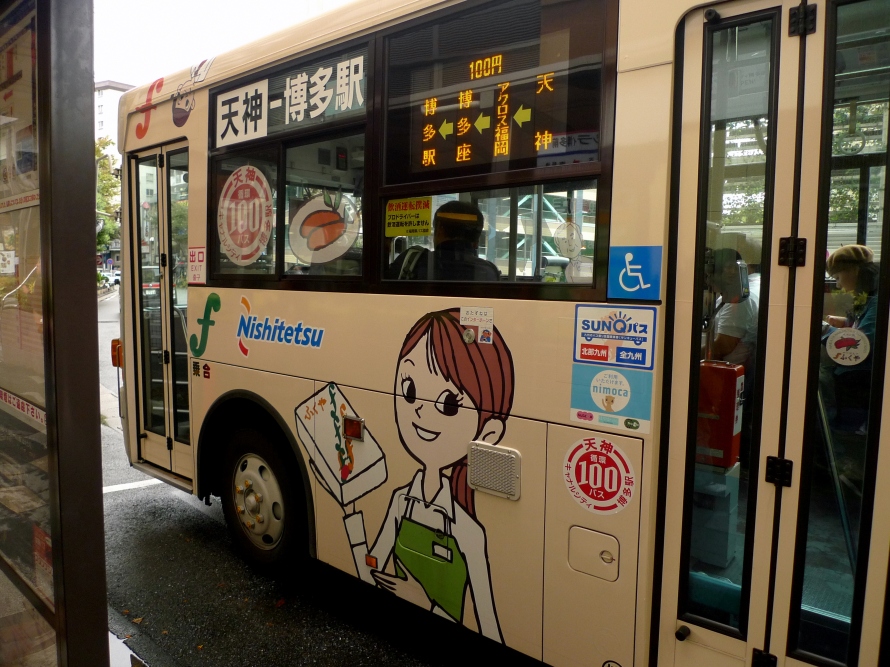 Green Bus that goes round the city 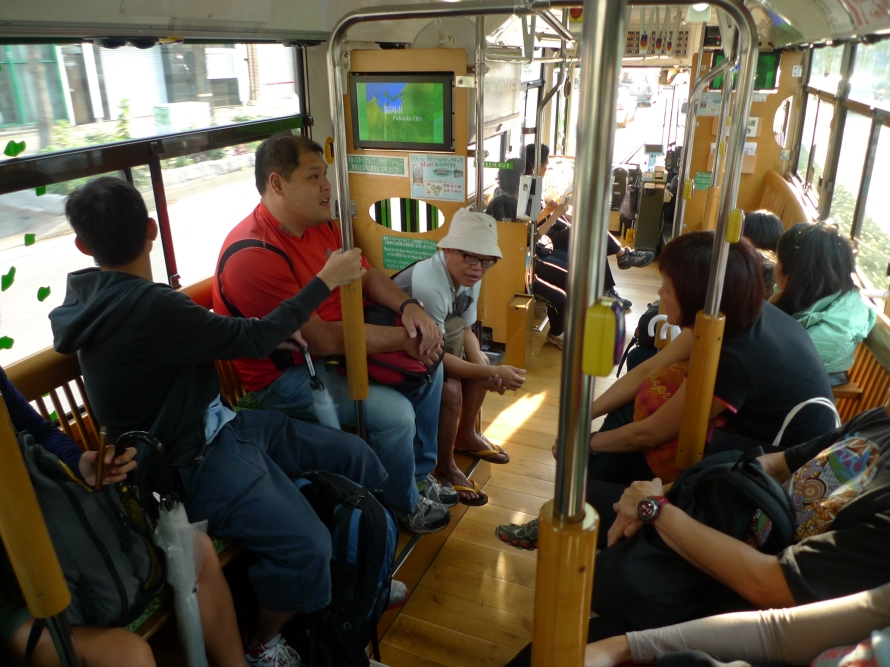 On the green bus

When we returned to Fukuoka, we explored Tienjin. Another fantastic shopping district with a sprawling underground shopping mall – which I didn’t have time to explore. What interested me was how the Nishitetsu Fukuoka station integrate the subway, train (& shinkansen), bus, shopping malls so seamlessly. I couldn’t tell where one started and ended and that’s how I almost got lost.

On the last night in Fukuoka, the gang went to eat the famous chicken hot pot Mizutaki  a Fukuoka specialty cuisine. Apparently it was invented during the Meiji era and made popular by scholars. Our attempts to visit the the most famous Mizutaki restaurant kept getting thwarted because each time we wanted to go, it was closed (it was a Sunday). Luckily Ai leng managed to find another one which the gang claimed was so delicious they almost swallowed the pot; they tried their luck again with the sake bottle after emptying it of sake but were stopped by the wait staff (luckily!). Well, I missed it all because I went shopping but as compensation, I had a very delicious ramen. 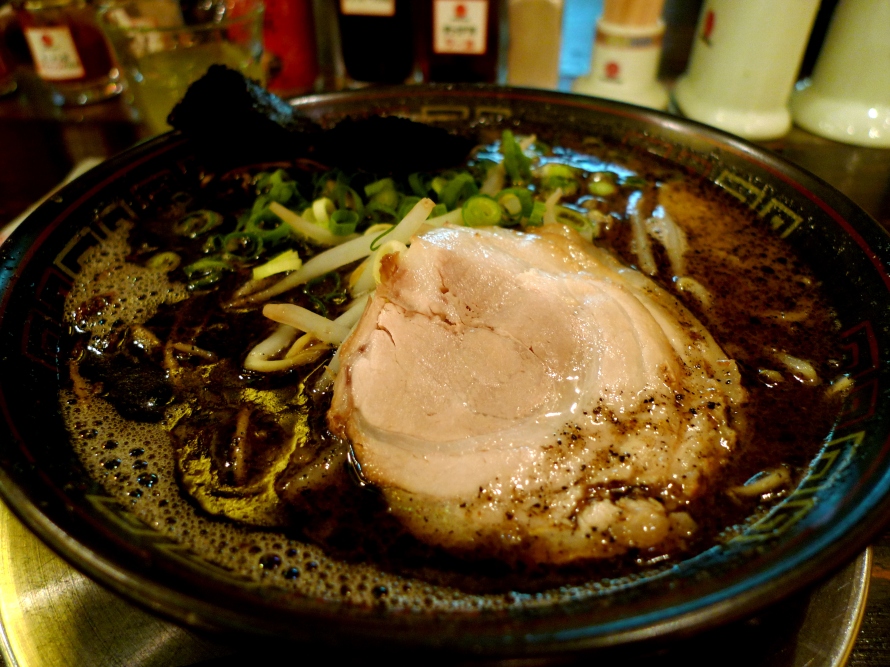 Our visit to Fukuoka would have been complete if we could go to the sake brewery. But we found out when we tried to go, that it was damaged by a fire a few months prior and would only reopen in Feb 12. Then there’s Ippudo ( also known as Hakata Ippudo 博多一風堂). We ought to have visited it as Fukuoka was the birthplace of Ippudo. But we didn’t know then.

Well looks like, its inevitable that, I will have to go back to Fukuoka again. Soon.