I think it takes a lot of guts to call a city hell (this is what Beppu 別府市 means). And helluva humour. I mean, how does it sound if I am its mayor trying to attract talents to the city: hey, wouldn’t you come and live in hell? Or me telling a friend: hey, I’m living in hell now, please visit.

The highway to hell was actually very scenic. We hopped onto a long distance bus from Fukuoka, ambled over a mountain then headed towards the coast.  And there was Beppu, sizzling nonchalantly next to the sea. As we meandered down the mountain, we could see swirls of hot steam rising from little houses in the distance.

Apparently, Beppu used to be the sin city of Japan due to its bustling sex trade (remembered by way of a sex museum). Of course, now, its better known as Japan’s top onsen-city, due to the high concentration of hotsprings there. But we didnt know all that then.

The town was a little sleepy when we arrived. Oh it felt laid back, but very nicely organised and very clean. There were no bright lights and blaring noises. Flat and low-rise, it was flanked by a mountain in the background and the sea in front. Totally picturesque. And really nice when the wind was blowing the right way and the weather was good.

This welded perfectly with the sanistised bit of history we read at the Beppu station:  how Mr Kumahachi Aburaya, using Amercian marketing tactics, helped advertised and pushed Beppu to become a top tourist hotspot in the early 1900s.

We were expecting to step into a hot furnace but everything looked so .. benign … almost disappointing! har har.  Our ryokan  晴海 (Seikai) was  a tall, modern building solemnly erect next to the sea, one of the taller buildings around. Many gems were hidden inside. First we were ushered to its reception hall which opened up to a well-tended lawn and the sea. This immediately lifted our spirits. Then we explored the rooms, big, comfortable and all looking out to the sea and came with its own bathtub onsen fronting the sea. There were many baths to choose from some on the ground floor, some on the upper floors, many restaurants (fusion, japanese, chinese) and a smoking room that had an amazing collection of vinyl records (some autographed!). We could easily wallow the whole day (and night)  in the hotel.

To Hell and Back …

There were supposed to be 8 or 10 hells, couldnt remember all except after a while, all hells looked the same. the entrance to most of the hells was very nicely coiffed. you wouldn’t had guessed.

All the hells were distinguished by themes based on the properties of the waters (yeah, each is a little hotspring on its own). So they were named

Here’s some snapshots at the various hells.

Cant believe this is hell 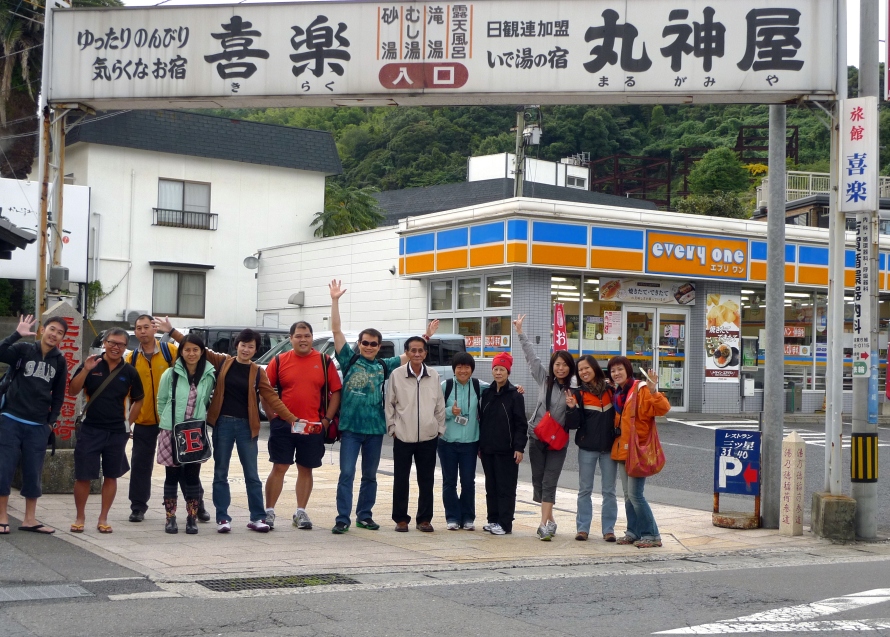 From the Rooftop of Beppu  …

After we evacuated from hell, we took a bus and funicular to the mountains – Mt Tsurumi (鶴見岳). earlier we were worried that the weather would be against us. Fortunately, not.

If Beppu was hell, it hadth never looked lovelier. The town was spread out below us. The trees were just turning red. the sea framed the scenery and we even saw a crater lake. At 1,374.5 m tall, Mt Tsurumi would be considered a moderate trek from the base. But in the interest of time, we cheated. Still the last few steps to the summit was no walk in the park. I was panting heavily even before we reached the top (but then i’m not a good benchmark cos the first person to reach the summit was the oldest in our group – Ailengsan’s papa!) And it was windy and chilly up there. I think it was 12 degrees then. 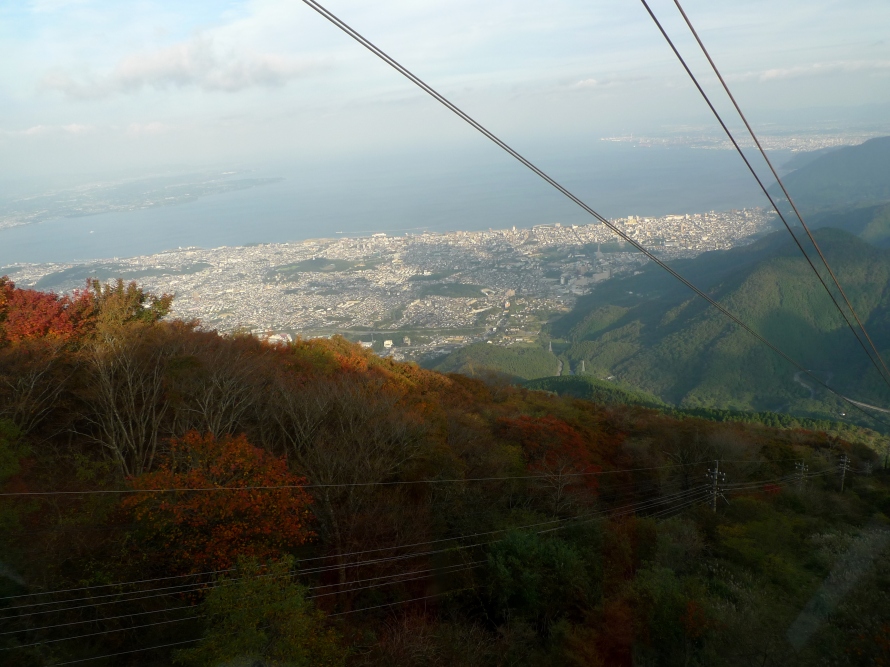 On the rooftop of beppu

Trail to the summit 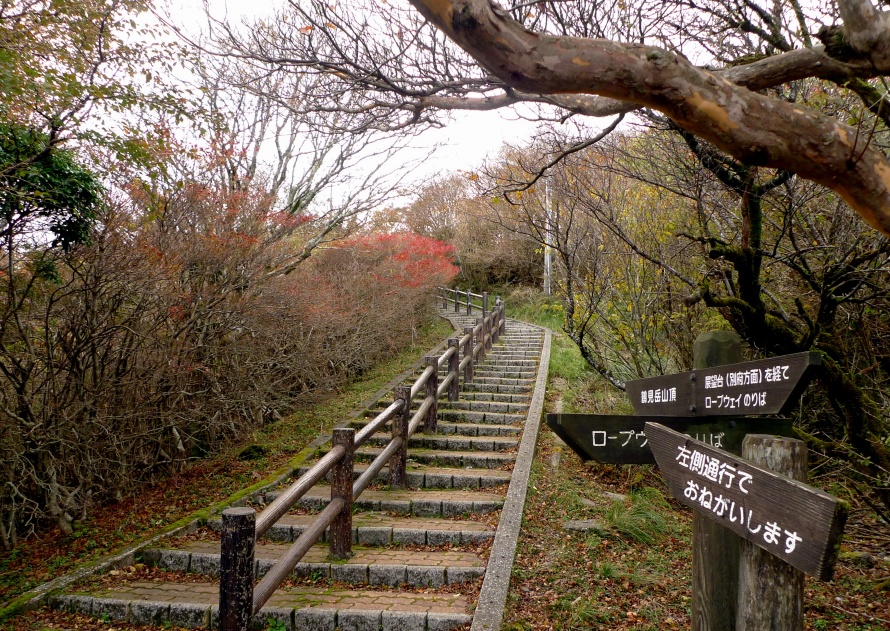 Nice walk to the top 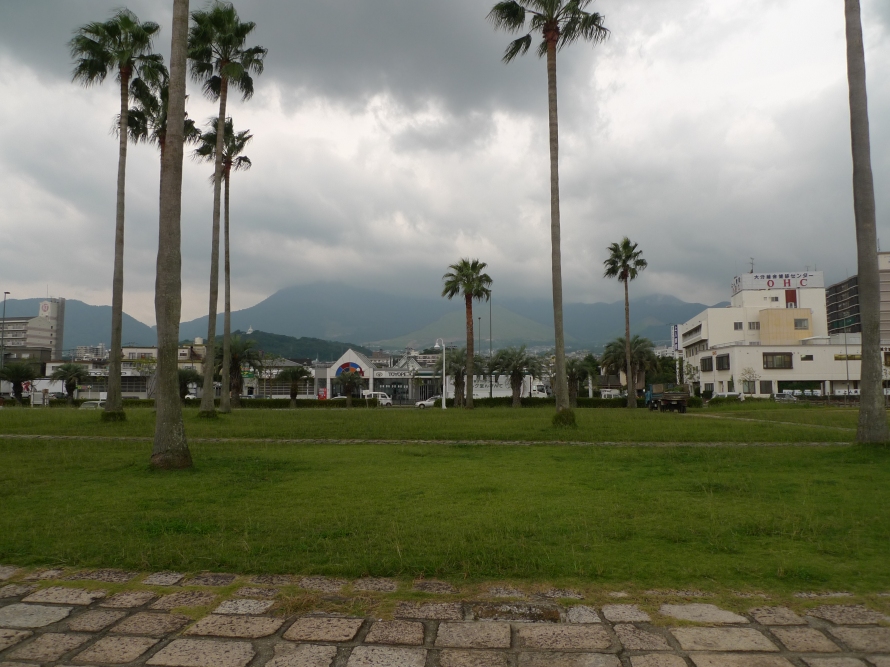 Beppu on an overcast day

Nice walk after morning run – back to ryokan