I felt it immediately when I stepped into Bangkok’s Suvarnabhumi airport: how aged it had become (and it was only 12 years old)!  Whatever happened while I was not looking?

2012 was my last trip and like all the trips before that, the taxi was the fastest, most direct way to town then – or so I thought. This time, my mates brought me to take the train. It was easy – go down to the basement floor, follow the signs, purchase a token (45฿), take the train to Phaya Thai then transfer to the green BTS line to Chit Lom station (26฿).

No rip-offs, no traffic jams. 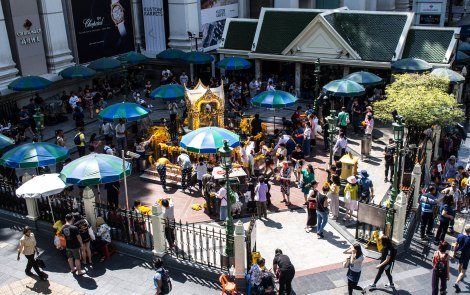 We stayed at the 4-star Arnoma Grand Bangkok at a bargain price but as with all bargains, there was a catch. The location was fantastic: next to Gaysorn, opposite Centralworld, Big C was next door and Pratunam was a short walk away. But it was old and in severe need of an overhaul. The rooms had a lingering musty smell, the water heater was frequently incapacitated and the sound-proofing at the entrances lent a spooky feeling. Turned out those whispering voices were from guests walking past outside or next door. 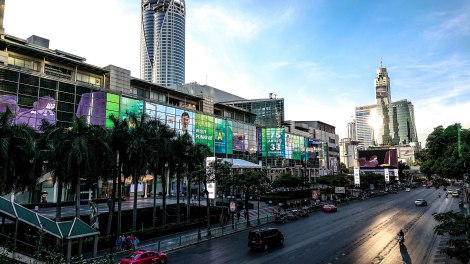 Centralworld, looking up to date with digital panels

We did what everyone who went to Bangkok did: eat, shop and get massaged. But things were no longer as cheap and the service level just didn’t feel the same. Some things didn’t change though: food was still good, the massage still cost the same *surprised* and retail staff still had trouble understanding English (some could speak Mandarin though).

Our first meal was at Siam Paragon, a shared bowl to stem those hunger pangs so that we could save our stomach for the main meal. We only noticed the cafe’s name after placing our orders: Pho Today Vietnam.

Pho today, Siam tomorrow – maybe. And we thought that it was Thai. 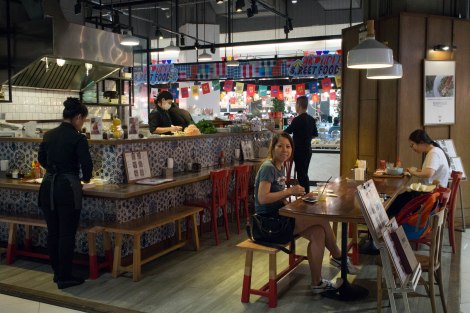 We didn’t try the pho; had the pork with fried rice which was tasty. The rice has a slight buttery fragrance that made it appetizing. 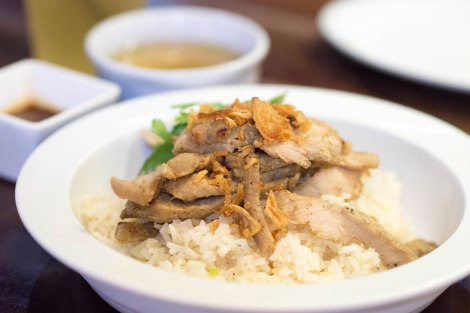 Our next stop was  Taling Pling at Centralworld (3rd floor). This was an establishment introduced by a Thai in 2012. Glad it was still around after all these years. But we did take many twists and turns to find it because there was no unit number in the address.

Getting ready for the meal

We couldn’t really understand the menu because the English descriptions were overly succinct (and deciphering those Thai words was tough). There were pictures but these were not sequenced according to the menu. So it was a case of try-our-luck-and-see-what-comes.  Our luck held strong – everything was good. But my favourite was the chicken wrapped in pandan leaf. 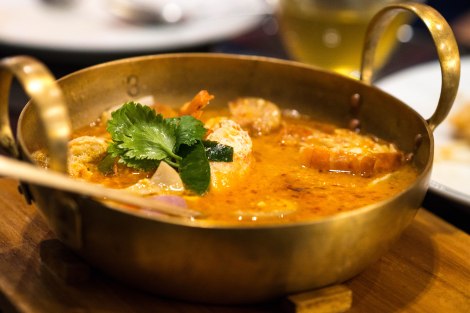 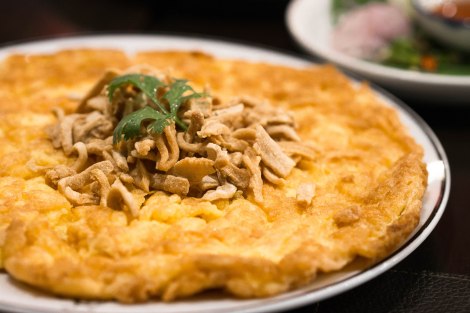 At night, in order to work those calories off, we walked 3km to Silom for the best Tonkatsu in Bangkok – Katsushin かつ真. Turn left from Thanon Surawang Road into the small lane Soi Than Tawan and Katsushin is on the left side. You are on the right track if you see Tawana Bangkok Hotel on the other side of Surawang Road.

We ordered the bestseller: Rosu Katsu set (pork loin, 270฿) which didn’t disappoint: juicy and succulent. The servings were substantial and the quality was consistent and almost on par with some of the better Tonkatsu restaurants in Japan. The hors d’oeuvre were so-so though. 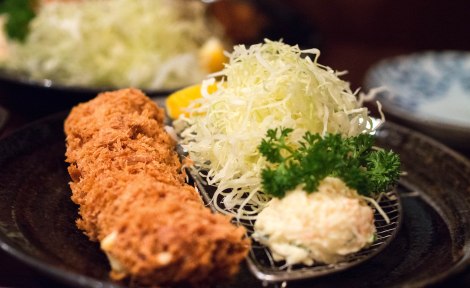 We wrapped up the day with a cosy get-together at a friend’s apartment. Bangkok looked lovely at night.

After gym, we felt we had burnt enough calories to justify another round of binge eating. This time, we decided to explore somewhere nearer to home: Pratunam.

Lung Prathunam Boat Noodles was our first stop – it was next to the canal under the bridge. Supposed to be very popular but probably because of the timing, it was empty when we got there and only started to get busy when we were about to leave. I think we got there after 10am. 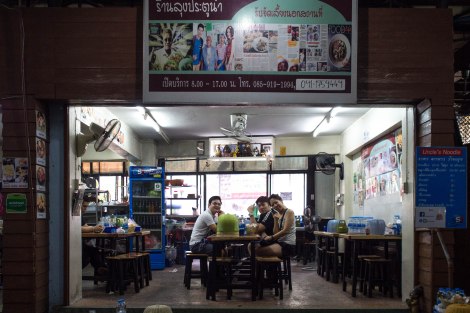 We ordered different styles to try: red sauce, dark sauce and clear soup. They were quite tasty though I won’t beat a path to eat it. The portions were small so that left ample room for us to move on to our next food target. And we didn’t have to walk far.

When we got out from the alley, we came to a shop at the T-junction manned by busy staff and decorated in pink hues. One of my mates said that’s the Michelin-Bib Gourmand Go-Ang Kaomunkai Pratunam Hainanese chicken rice which had recently landed in Singapore (NEX).

Again, there was no queue; we got a table quickly and placed our orders: 2 plates of chicken rice and 1 plate stewed pork. The chicken rice was good, the rice was less oily than the Singapore version and had a different fragrance from ours. The stewed pork was a surprise – well seasoned, braised into a softness that melted in the mouth – must try! 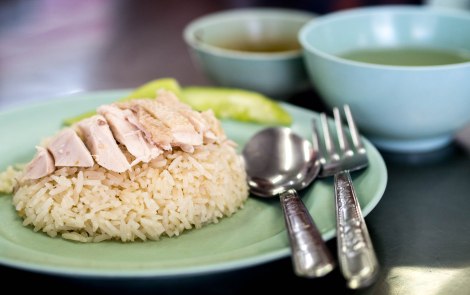 Shopping and massage done (we went to Lek next to Siam station), we did a very tourist thing and went to Ban Khun Mae just behind Siam Square.

Ban Khun Mae appeared to thrive on tourist business so we kinda balked but caved in because those stomachs were squealing and it was too hot outside. Surprise surprise, the food was good and the price was reasonable. Again, everything we ordered was good.

You can dance, after dining at Ban Khun Mae

We wanted to eat mango sticky rice so we skipped dessert and decided to take 5 in Siam Square first. But then we saw Pancake House and like Hansel and Gretel, were lured into the lair by the wonderful smells wafting out from it.

This was the best souffle pancake I had ever eaten. 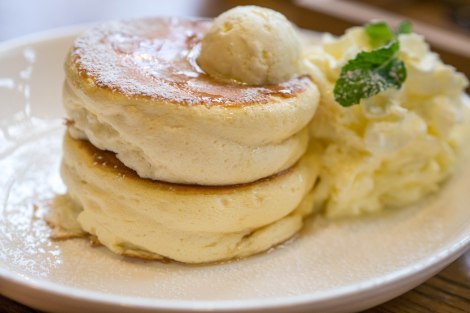 After the souffle pancake, I dragged my mates (with the help of a taxi of course) to the Giant Swing district – Sao Ching Cha. There are lots of great eats in that area but due to limited time and stomach space, we zeroed-in on Kor Panich, which was 82 (years old) going on 83. It received the 2019  Michelin Bid Gourmand but everything’s still the same: the shop, the owners, the vibes. 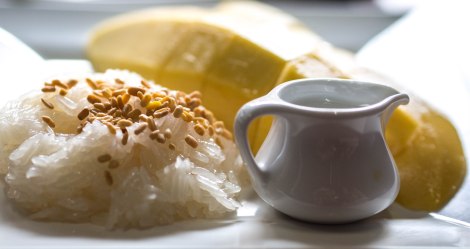 The standard’s still there: smooth and sweet glutinous rice with warm, slightly salty coconut milk was warm and fresh, tangy mango slices. We saw many locals stopping by to buy the glutinous rice. I bought 1 pack too – half kg (100฿) – could last 3 days without refrigeration and up to 1 month (chilled). 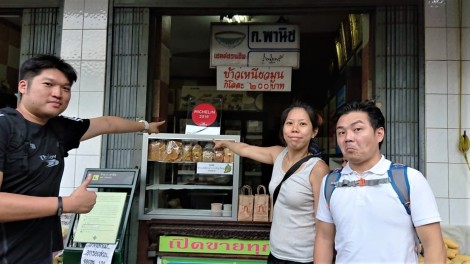 People, here’s the proof (zoom in)

We also tried the Durian sticky rice and and it was equally yummy. 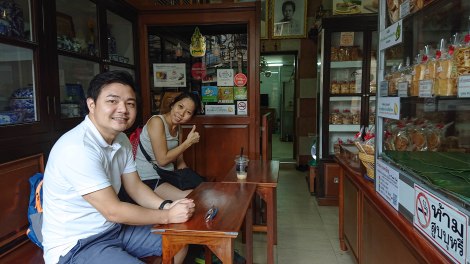 Waiting for the mango sticky rice to come

Mindful that we had been eating non-stop, we walked from Kor Panich to Yaowarat Road, Chinatown then to Ba Hao a Chinese-styled bar off Yaowarat. That’s about 2.6km. On the way, we made small detours to the Yaowarat morning market and the night street market.

The night was still young but the bright lights of the mobile food carts were already turned on. So was the crowd. 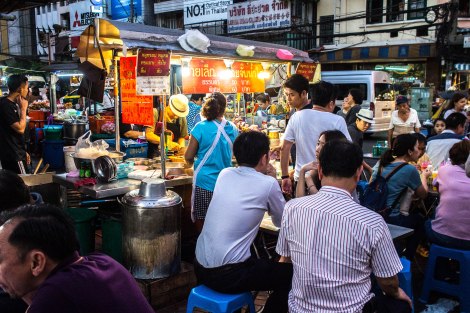 Oh yes, we joined the queue for toasted bread too. 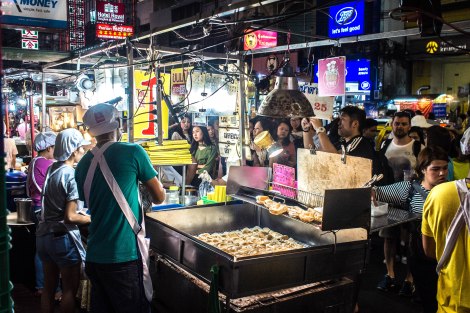 Walking down the street, we were surprised to see the Michelin signs here and there. Check out the Michelin Bangkok Streetfood Guide here. 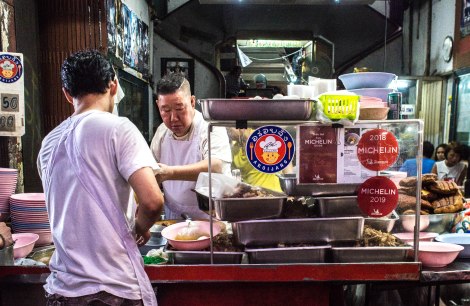 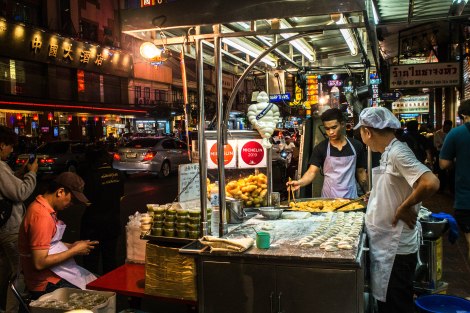 Chinatown was so full of character

Our final destination of the day was Ba Hao, a chinese-styled bar located in a conserved shophouse. It was really dark inside so taking photos was extremely challenging. Finally someone helped with the lights and we could get some nice shots.

The bar occupied the ground floor of the shophouse and the upper floors comprised rooms for lease.  Space was rather tight – there were only about 6 tables which could probably pack in 30 people + another 7-8 chairs at the bar counter.

The drinks were interesting and come infused with oriental herbs or spices. Every one we tried was good (perhaps should have tried them all). The bar grub was the one that surprised. All of them were delicious. Overall, it was a good experience. If there’s one thing I could change, it would be the (dim) lighting.

Yes, because I am not a romantic. 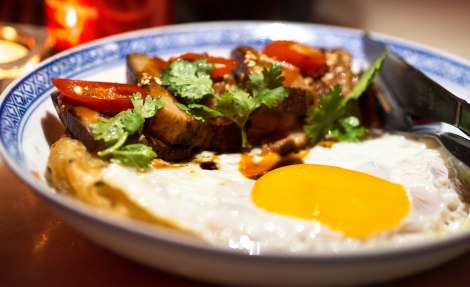 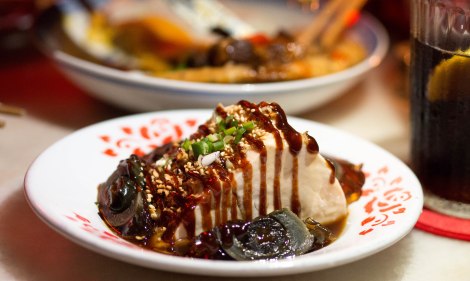 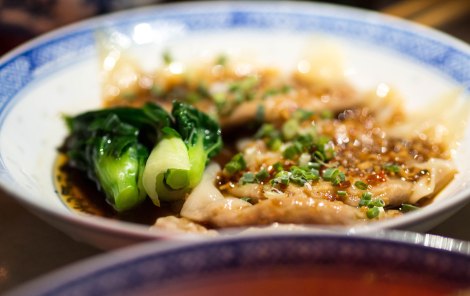 I wanted to try a western breakfast this time in the Ari district but the scone shop that we went to (Witty Ville) was a hole-in-the-wall, more ideal for takeaways. So we took the scones and went to the nearby Onedee Cafe which was known for Thai-inspired ice-creams. Not the place for bacon with Eggs Benedict and spinach, unfortunately. 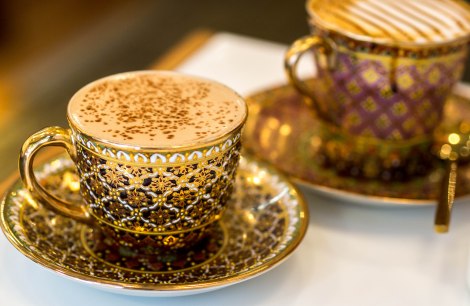 In hindsight, we should have tried the ice-creams or chat up the good-looking barista.

For lunch, we went to Em Quartier (opened Mar 15), a luxury shopping mall linked to the Phrom Phong BTS (5 stops from Siam) with an interesting list of F&B tenants.

All ready to attack! @ MK Live

We had a reservation for Shabu-Shabu at MK Live, the top-tier MK concept launched by the MK Group in Mar 17. It featured vegetables from select farms, premium meats & seafood and steam Shabu encased in wooden boxes imported from Japan.

I thought the soups (normal and black) were a tad too sweet for my liking but the ingredients were really fresh, so fresh we hardly touched the condiments. 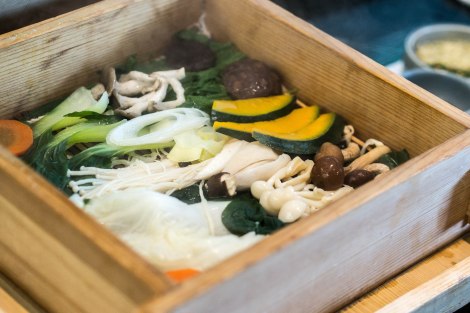 Wrap for the duck – good on its own 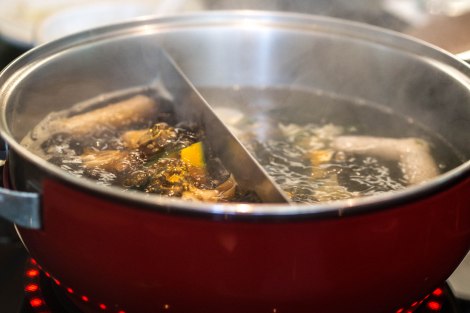 Other than Shabu and Sukiyaki, MK Live served Dim Sum, roast duck and a long list of beverages including beautifully presented fruit teas, cold-pressed juices, and desserts. Their desserts all looked fabulous – the Bua Loi that we ordered was extremely good.

Our final food stop was @ Siam Paragon’s The Ninth Cafe, an Italian-Thai fusion place. It’s famed for its crepe cakes  (we tried the green tea version) but I wasn’t impressed. The mains were quite decent though – simple, hearty, with home-cooked flavours. The grilled beef strip loin was very tender, very tasty just that paring it with glutinous rice was a bit odd for us. 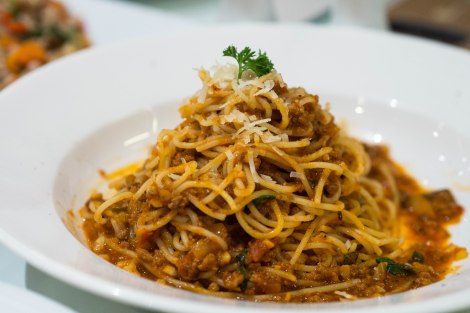 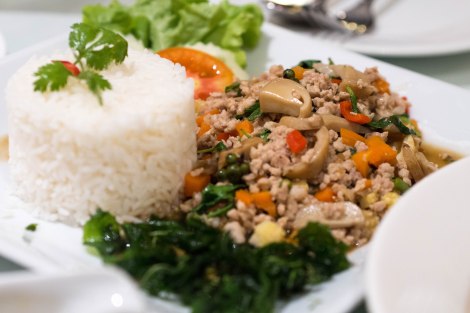 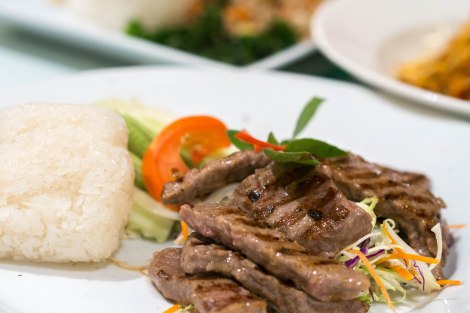 We could have left Bangkok with beautiful, saccharine-infused memories if not for a small incident.

So we were finally in the airport transit area. Worried we’d starve during the flight, my mates went get Burger King (nearest our gate). When they told me the damage – more than 1,800฿, I thought they must have made a mistake. That’s S$81 for 3 burger sets and 1 nugget! A whopping S$24 per burger set.

What a rip-off and in the airport no less. Certainly the most mediocre, most expensive meal, value-wise, in Bangkok.

And I didn’t even get to eat my nuggets (the server didn’t pack it in and then the final call came).

You have been warned.