As Close As One Can Get

100km away from Torino, along highway 50, there was a chain of lakes nestled deep in the mountains – the target. From the village of Locana, it’s only 40km but almost a 2000m ascent. As we turned the corner of yet another bend, we found that that we’d suddenly arrived at Colle del Nivolet (lit. the Hill of Nivolet). At 2612m, it shouldn’t be a mere hill, not when it afforded a panoramic  view of the lakes we drove past minutes ago – the Agnel and Serru lakes, one blue, the other turqoise. Further up the road, we saw a road shoulder, wide enough to accommodate a few cars. We parked the car, crossed the road to a pole stacked with more signs and followed the trail down. As we walked, we realised that the trail was leading into a valley. Then immediately, we saw them: the mountain hut and the nivolet lakes.

Gran Paradiso (the peak, 4061m) is considered part of the Graian Alps which is in turn part of the Alps range that extends from France to Slovenia (passing through Germany, Italy, Switzerland, Austria, Monaco, Liechtenstein as well). in fact, Mont Blanc (4808m) the white, straddles France and Italy. unfortunately for the Italians, the summit is in french territory. While the Italians have to share many of the high 4000 graian peaks with the French and the Swiss, the one they can truly call their own is Gran Paradiso (lit. great paradise) which sits squarely in a reserve the Italians have aptly named the Gran Paradiso Park. At 703 sqkm, the Gran Paradiso Park is almost the size of Singapore (719 sqkm).

Which Valley to Parry In

There are 5 valleys in the Gran Paradiso Park each having its own hiking trails, mountain huts and bioecosystems: Orco, Soana, Cogne, Valsavarenche and Rhêmes.  The Orco Valley to the south covers Ceresole Reale, Noasca and Locana. To the east, the Soana Valley includes Ronco Canavese and Valprato Soana. To the west, the Rhemes Valley stretches lengthwise to include Rhemes Notra Dame, Rhemes St. Georges, Introd and Valleneuve. Then there’s the Cogne and Valsavarenche Valleys clasped in the middle. It is possible to do a multi-day hiking circuit around and through the entire park. This circuit takes more than 10 days.

source: http://www.pngp.it (hover your mouse over the map to view the valleys)

The Orco and Soana Valleys are in the Piedmont region while the rest are part of the Aosta Valley region (Italy is divided into regions, provinces, municipalities in that order). Both regions are renowned for their wines.

Valle Orco – The Valley of the … Ogre?

Orco translates into Ogre in english. No, we didn’t meet any ogres.  but the valley was impossibly beautiful I won’t be surprised if ogres also paid a visit.

Getting to Valle Orco would be a little diffcult if we didn’t drive. There’s a bus service from Torino to Ceresole Reale and Colle del Nivolet but it seemed the timing and frequency was bad (I’d only seen 1 bus and it stopped at ceresole reale). If you drive, you could have the option of staying in airbnbs in any of the 3 villages along the way: Locana(613m), Noasca (1065m), Ceresole Reale (1613m). Locana was 70km from Torino, about 2 hours’ drive. 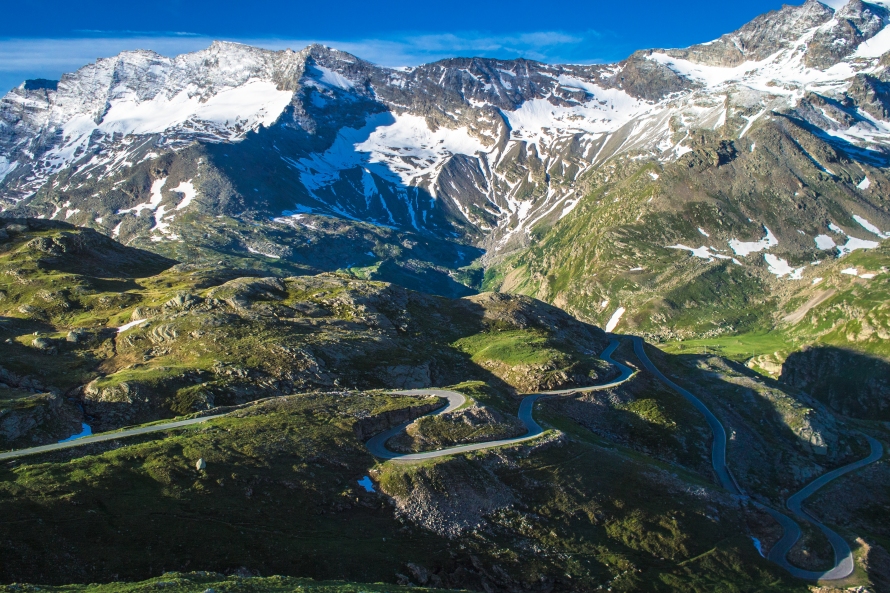 up the meandering road in the morning

The first mountain hut was only 5 minutes from the road ie Rifugio Città di Chivasso and what a beautiful backdrop it had. The other mountain hut Rifugio Savoia was all the way down to the end of the paved road, next to the lakes.

the rifugios. rif savoia is the small one further down.

Our plan was to hike towards Laghi Rosset (the Rosset lakes, 2703m) and depending on how far the weather permitted us to venture, head towards Col Rosset (Rosset Pass, 3023m), though we weren’t really serious about crossing it.

To the Rosset Lakes

From Rif Chivasso, we descended to the road, followed the bend and then we could see the Lake Rosset trailhead. There were 2 signboards pointing to the trails heading uphill.

lake rosset: the trail head is by the road, after the bend

The climb was easy and the view was stunning. We only had to adjust our pace to adapt to the higher altitude (and thinner air). It seemed almost inconceivable that we could be rewarded for exerting so little effort. 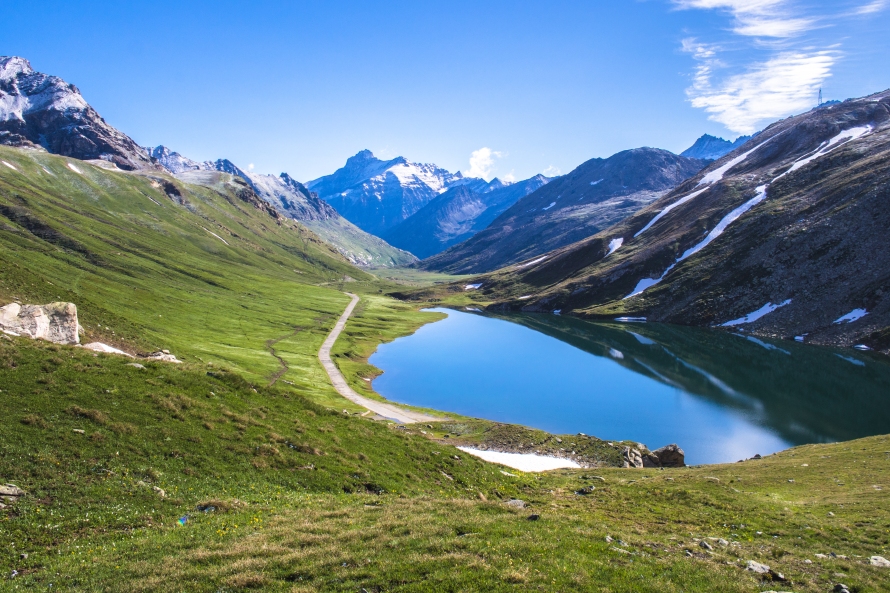 from the top view of lake nivolet

When we turned around to look at where we’d come from, we were treated to another beautiful sight: plumes of clouds hanging delicately over snow-capped peaks. 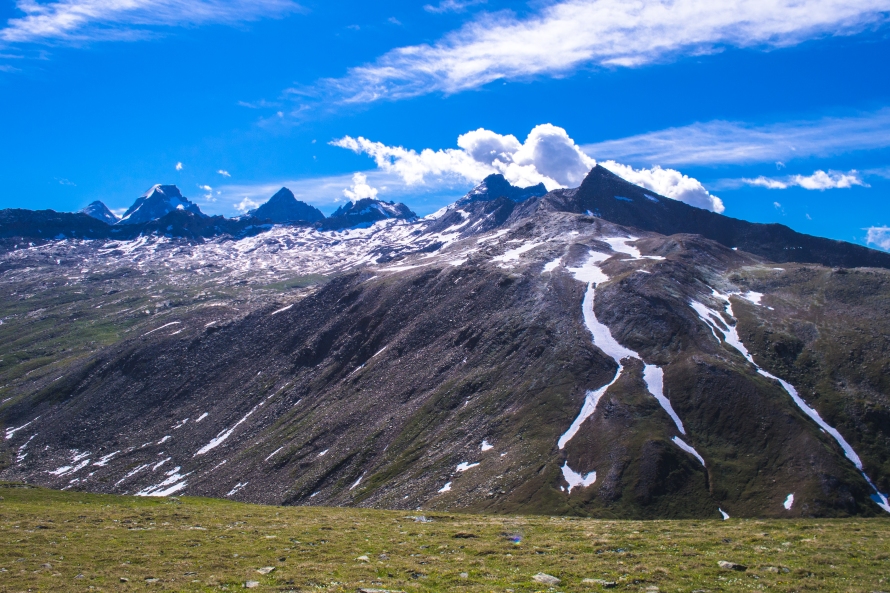 clouds against a blue sky

the snow-capped peaks in the background

There were quite a number of split trails so we picked the ones that were clearly marked (with signs). But we soon realised that most of them converged at the same place. There’s little chance of being lost if you studied the map well before hand (i only used gps). We were also feeling a little heavy-headed, minor effects of mountain sickness.

to lake rosset – a beautiful walk

After we’d climbed the hill, we hit a gentle plateau and shortly after, arrived at Lake Rosset (2703m). We saw the bluest waters surrounded by a carpet of green, flanked by snow covered mountains. I’d have rolled on the grass many times over if not for a cold draft blowing its way across the lake. 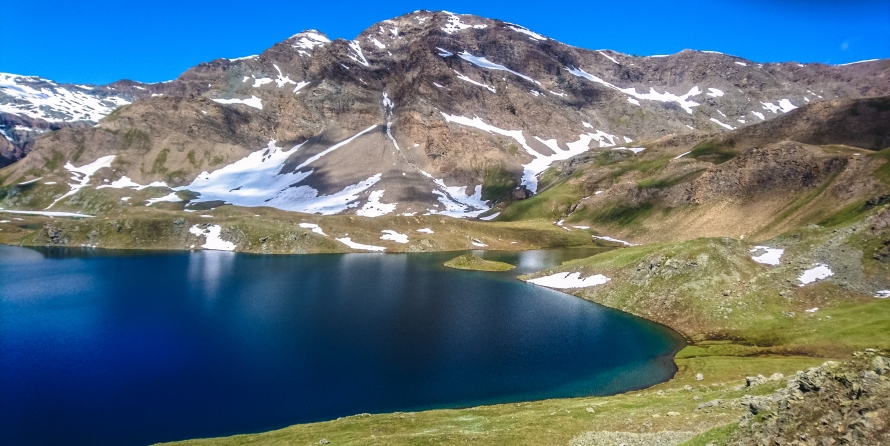 the peaks in the distance 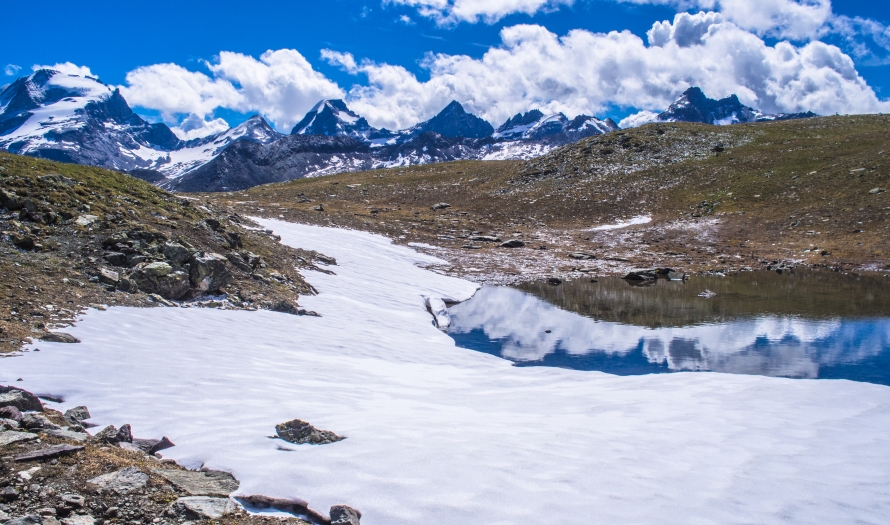 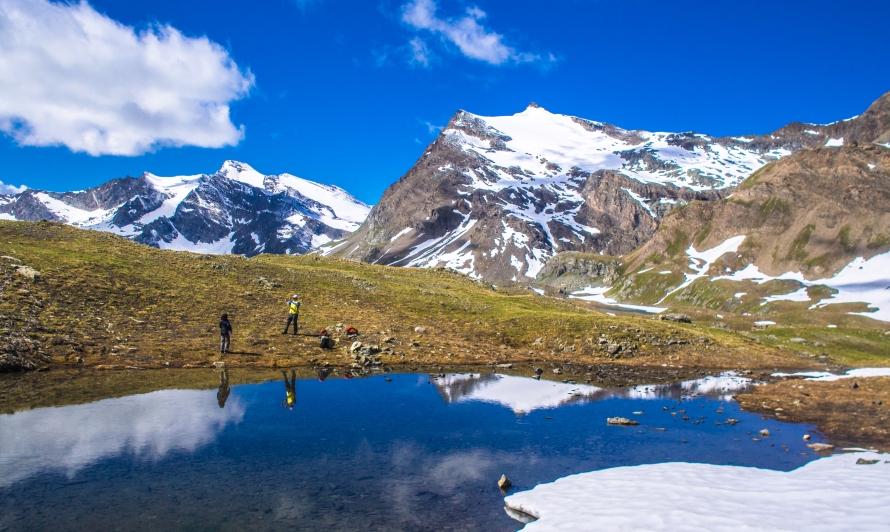 reflection – the other (smaller) rosset lake 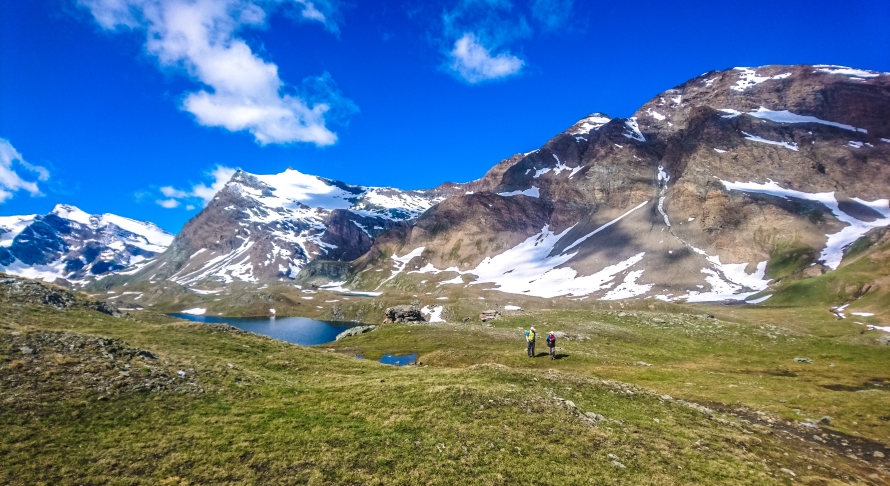 panoramic view – the other side of the rosset lakes

We headed back towards Rif. Chivasso for lunch and the view was equally splendid. 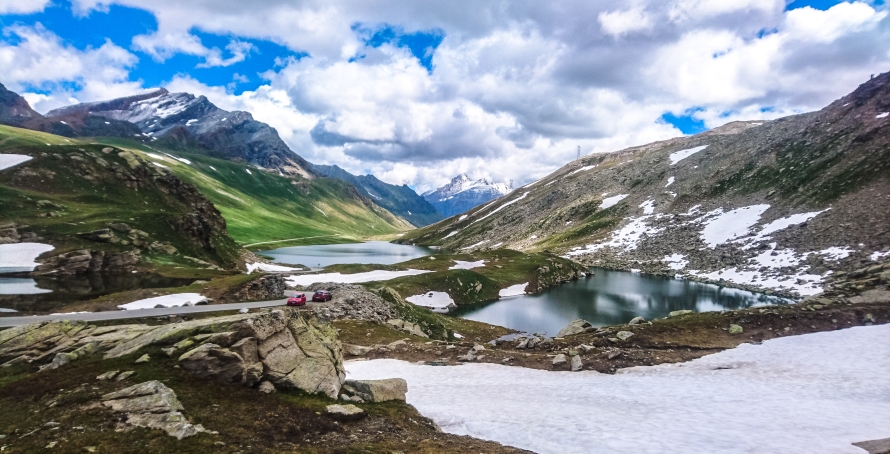 Lunch was only served at 12pm so we rested in the cosy rifugio and waited for the chef to return. The heater in the restaurant kept us warm and toasted. 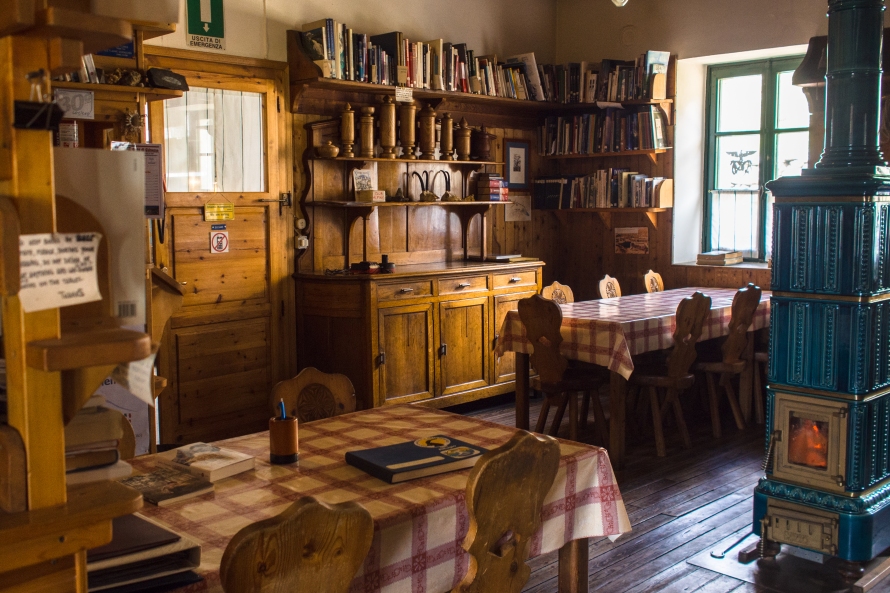 the restaurant in the rifugio 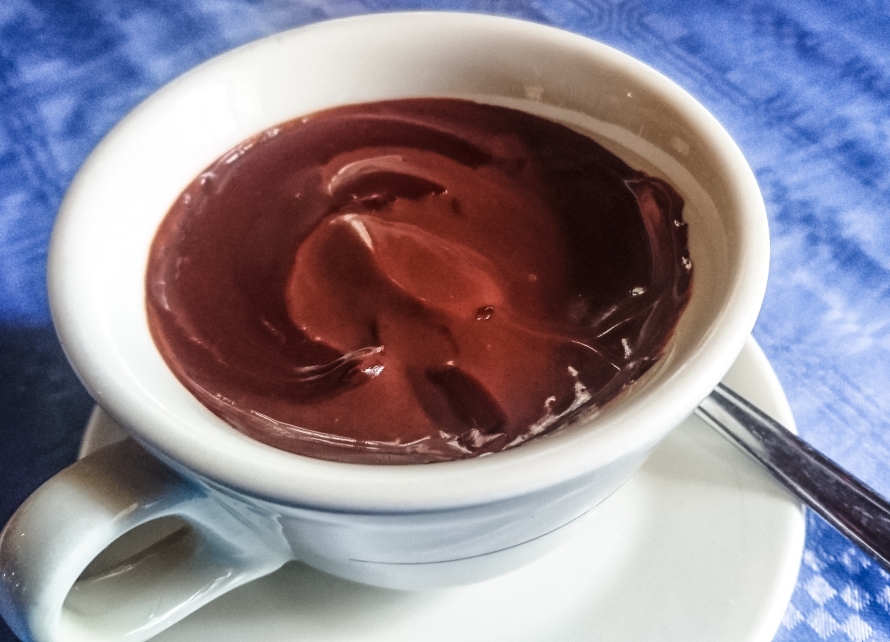 Tt 1pm, we went back to get the car, then drove all the way down to Rif. Savoia. We thought there was still time enough for us to hit the nivolet plains trails but it wasn’t long before we had to beat a hasty retreat when raindrops started to fall.

the trails leading to pont

the plains of nivolet – alternatively can also walk here

the car, slowly being devoured by clouds

The rain turned into snow and into sleet. Luckily we were able to avoid most of it (moved fast to get in the car). Nothing could be done so we decided to call it a day and head back down to Locana. The weather got worse as we headed down. 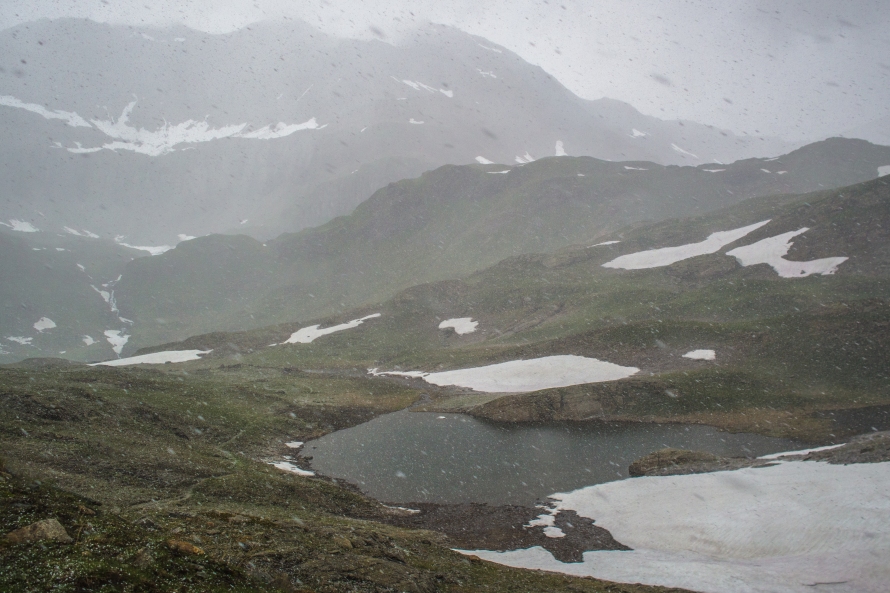 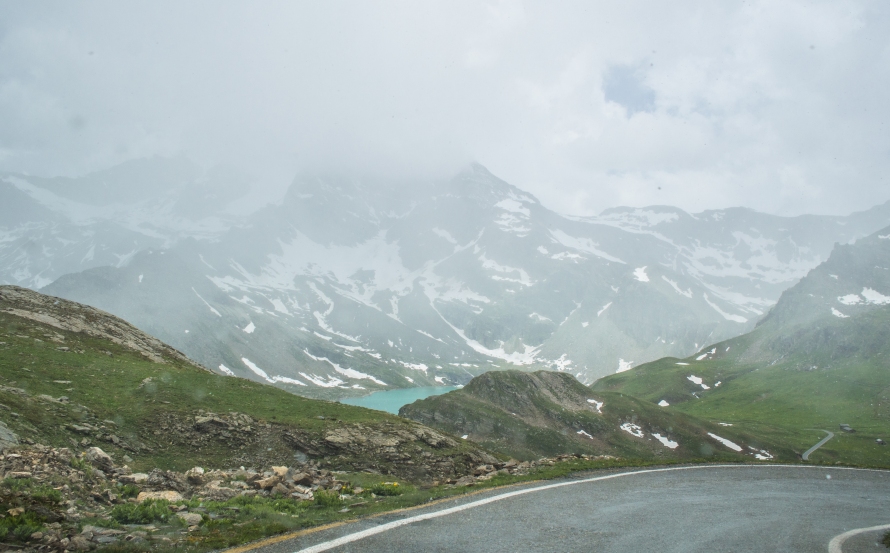 lake serru in the distance

The Huge About-Turn: Sunshine After Rain

We thought we’d seen all there was to see of the Orco Valley but we were wrong. As we drove down the mountain, the snow/sleet began to thin, as if they ran out of steam/stamina to get to the lower reaches. Soon, we could make out lake serru from a distance and then it was suddenly hot and sunny again, as if there had never been a snowstorm. 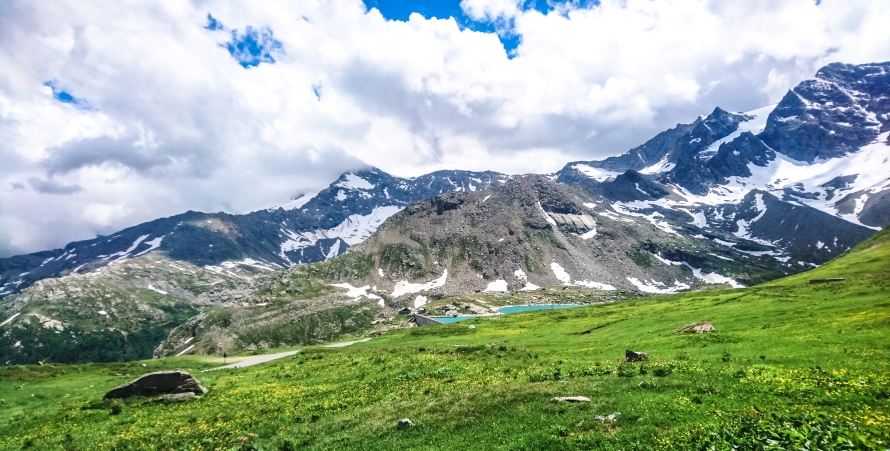 lake serru – from a distance 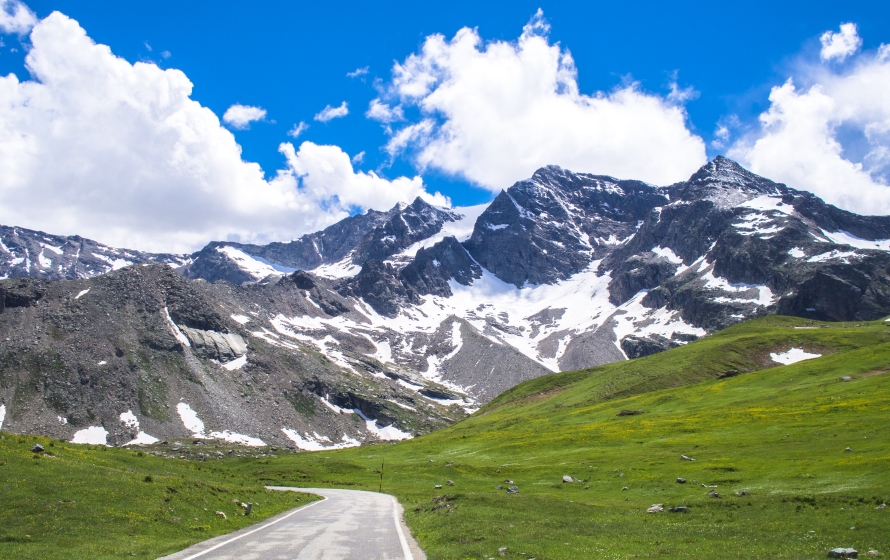 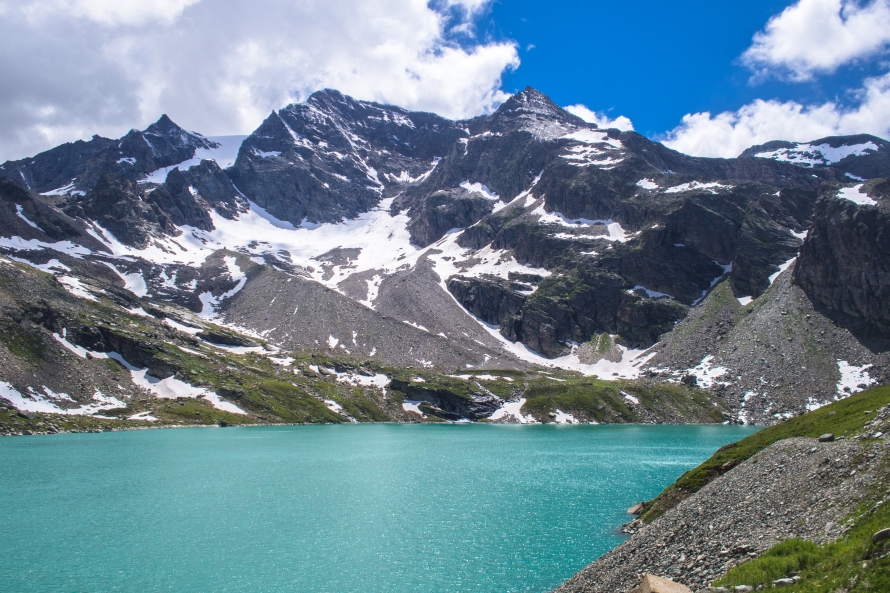 The weather and colours were gorgeous, even the marmots came out to play (but they were too fast for my camera). As we drove away, i couldn’t help thinking: what a fortuitous encounter with a precious piece of paradise.

My mission of the day accomplished, all i wanted was to kick off the trekking boots and settle down to a glass of local wine.